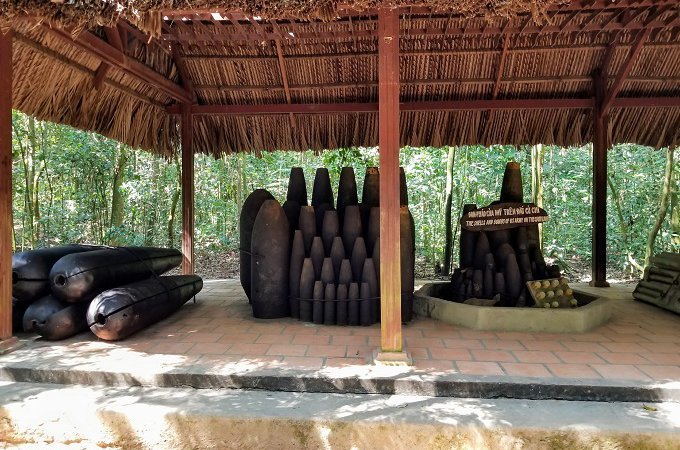 One of the most popular things to do in Ho Chi Minh City (aka Saigon) is visiting the Cu Chi Tunnels.

Most people join a tour group to make the visit. But if you’re like me and averse to such group tours, however, great news: it’s possible to DIY it!

Here’s everything you need to know about visiting the Cu Chi Tunnels on your own.

The Ben Duoc Cu Chi Tunnels site may be a little further away from Ho Chi Minh City, but it’s less touristy and more true to what the tunnels were during the Vietnam War.

The Ben Dinh Cu Chi Tunnels, on the other hand, are mostly reconstructions.

And in order to accommodate tourists (especially Western tourists who may be a bit bigger in both height and weight), many of the tunnels there have been enlarged. It’s also where most tour companies go, guaranteeing a crowded experience even if you DIY it.

For the more authentic experience, go to Ben Duoc. 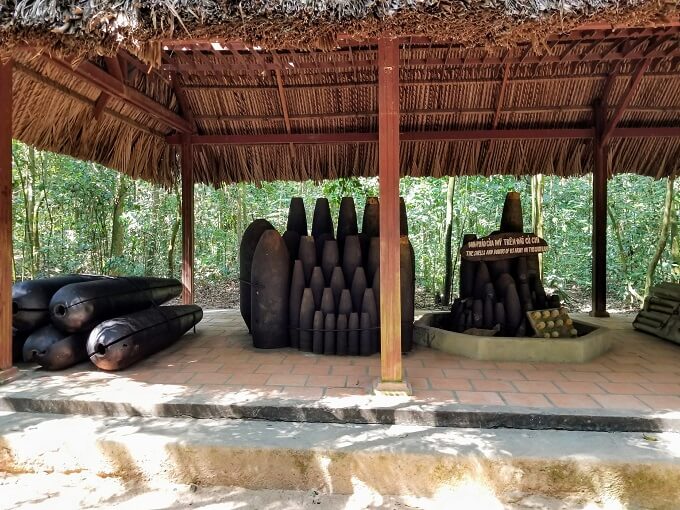 While you can certainly hire a driver to take you to the Ben Duoc Cu Chi Tunnels, it can be cost-prohibitive for most people. Instead, tackle the local bus system and get yourself there and back for 34,000 Vietnamese Dong ($1.47 USD).

Take that bus all the way to the terminus; it takes roughly 1 hour 40 minutes. Then hop on Bus 79 and mention Ben Duoc Cu Chi to your driver. Tickets for this bus are 7,000 VND each as of Feb. 2020, and the ride takes about 25 minutes.

Pro tip: download the BusMap app beforehand to make traveling by bus in and around Ho Chi Minh City a breeze. It’s a serious lifesaver.

Once you get off the bus, cross to the other side of the street toward this sign. 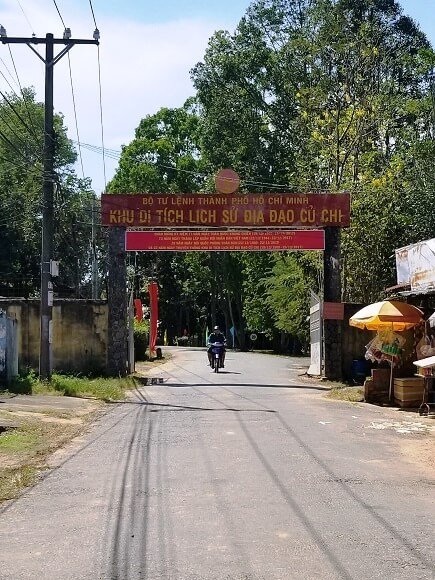 Since this site is way less visited, it is also less catered to visitors and can feel a little confusing upon arrival. But follow the signs that exist carefully and you’ll find a small ticket kiosk along the path that veers to the left. 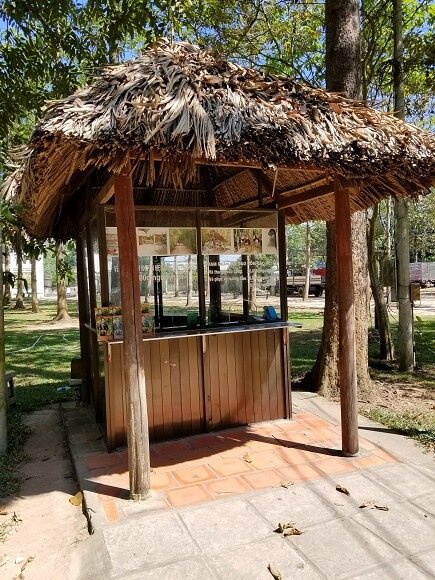 3. You should keep an open mind

Once you have your ticket, follow the path toward the visiting area.

Along the way, you’ll find the Ben Duoc Memorial Temple. It was built to remember and honor those killed during both the Vietnam War and the First Indochina War against the country’s French colonizers. 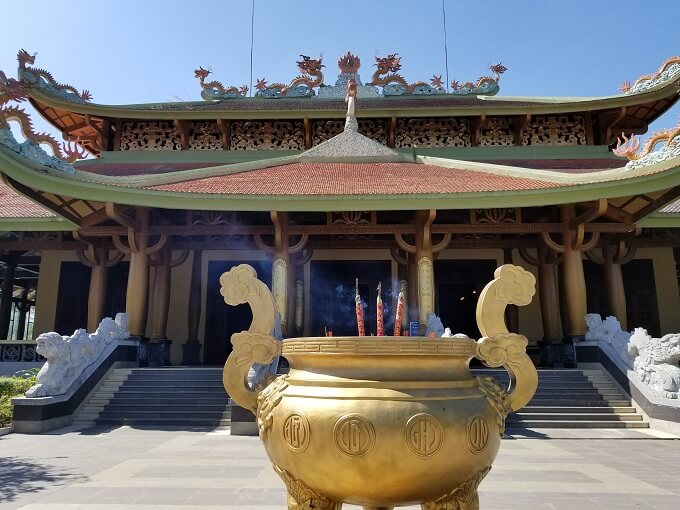 After another brief stroll along a forested path, you’ll find the meeting point for the tour.

Tours run based on demand, and the ticket kiosk seems to communicate with the guides to let them know whether to start a tour or wait for a couple more folks to show up. When we got to the meeting point, it looked like our guide and the 10 or so other guests had been waiting for us. (Oops, took too long at the temple).

First up was a 20ish-minute documentary. It was blatantly anti-American, but I can imagine that our history books and war memorial sites are no less biased.

The guides are very knowledgeable and will then take you on an interactive tour of the tunnels. You’ll also see craters created by bombs dropped in the area as well as traps set to ambush the enemy.

Whatever your opinions about the Communist Party of Vietnam and the Vietnam War (known there as the American War or the Resistance War Against America), the Cu Chi Tunnels are truly a symbol of the ingenuity, determination, and suffering of the South Vietnamese people.

4. The tunnels are not for the claustrophobic

Part of the tour is getting into the tunnels themselves to experience how Vietnamese soldiers and civilians lived for years during the war.

It was truly a humbling experience to get inside the tunnels, but it is not for everyone. 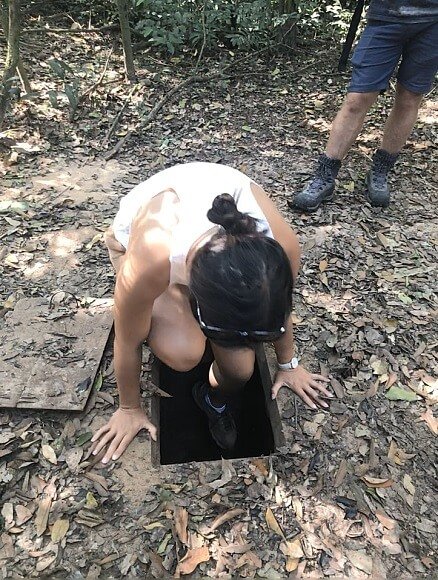 You really had to squeeze and bend over in the tunnels. As someone who is 5’9” but very flexible, I could just barely maneuver inside the tunnels without getting on my hands and knees, but almost everyone else in our group had to.

It was hot and humid inside, and you never knew what other surprises you’d get.

I’d just turned a corner when a bat flew straight over my boyfriend’s head. (Thank goodness I’d turned the corner — it would have scared the shit out of me.)

The good news is that you can still experience the tunnels without getting in.

There are several larger rooms inside the tunnels that were used as hospitals and such, and nowadays mannequins have been displayed to show what it would have been like. You can enter and see these rooms without getting down and dirty or feeling anxious about the close quarters. 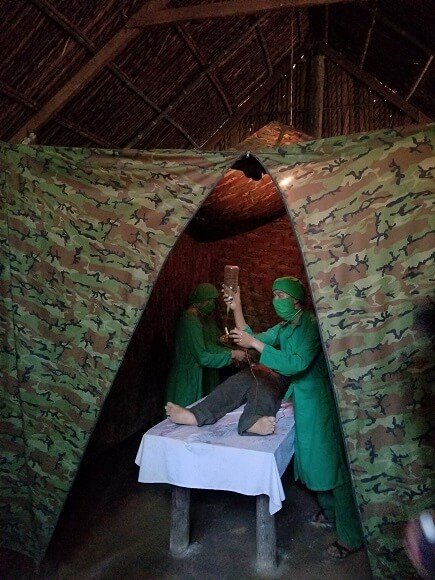 5. Budget a full day for your visit

In the end, we spent approximately 2 hours at the Ben Duoc Cu Chi Tunnels before taking the bus back. (Simply stand by the road outside the entrance area and flag down the next Bus 79 that you see.)

We’d left Ho Chi Minh City around 9:50 a.m. and got back around 5 p.m. So yes, the majority of the day is spent on buses, but it’s a fantastic way to experience something in a more local fashion.

While you’d be able to visit the Ben Dinh tunnels with a tour group in as little as half a day, I strongly recommend taking the time for this more authentic experience.

Last note of advice: bring insect repellant! There were some nasty little buggers out there.

Pin it to save it for later! 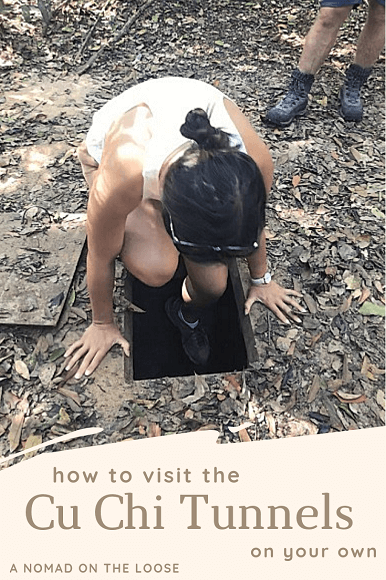